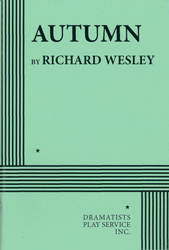 Apply for Rights
FEE: $100 per performance.
THE STORY: Franklyn Longley is a veteran big-city mayor who’s in line to become the first black governor of his state—until his godson is tapped by the party to run instead. As a new generation of black politicians comes forward, they must learn there is a price to pay in order to realize their ambitions. This gripping political drama explores the conflicts that arise when aspirations collide across generational, racial, and gender divides.
“You don’t take your mind off of AUTUMN for a minute as it proceeds, and you think about it long after its final bows.” —NealsPaper.com. “AUTUMN is a well-drawn…contemporary drama about the ever-changing urban American political mosaic, its casualties, and its winners.” —NewBrunswickToday.com.
Apply for Rights
Click here for ePlay