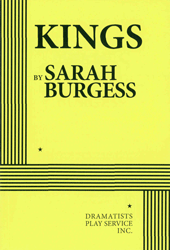 THE STORY: Kate is a sharp-witted lobbyist who doesn’t waste her time on candidates who can’t get elected, stay elected, and, above all, remain loyal to her clientele. Representative Sydney Millsap has a more idealistic approach to politics, which Kate fears may cost Millsap a prosperous political career. But when Millsap’s high-minded principles prove surprisingly resilient in Washington, Kate faces an unexpected dilemma: back the system or what she actually believes in?
“KINGS is entertaining and informative…The greed of special interests, the mendacity of politicians, the cockroach endurance of lobbyists: If these are familiar, they are also endlessly compelling…” —NY Times. “…a tautly intelligent drama…that goes against the theatrical grain…KINGS [is a] nuanced and accomplished play [that] shows us how inextricably bolted to American government the ironwork of special interests has made itself…KINGS gives you a short, useful course on the fuel Washington runs on. It adds to a vital public discourse about the kind of government we have vs. the kind we want.” —Washington Post. “A timeless exploration of timely political issues…KINGS, at its best, actually draws you into the campaign—giving you a hero to root for, a villain to lambaste, a slogan to memorize—before zooming out, imbuing the action with the kind of perspective and emotion that only fiction can provide…” —Entertainment Weekly.
Apply for Rights
Click here for ePlay