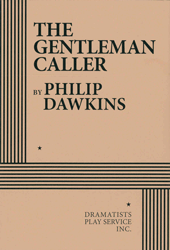 THE STORY: Tennessee Williams and William Inge today are recognized as two of the greatest American playwrights, whose work irrevocably altered the theatrical and social landscapes. In 1944, however, neither had achieved anything like genuine success. As flamboyant genius Williams prepares for the world premiere of his play The Gentleman Caller—to become The Glass Menagerie—self-loathing Inge struggles through his job as a theater critic, denying his true wish to be writing plays. Based on real-life but closed-door encounters, reconstructed from troves of comments (and elisions) by each man about their relationship, Philip Dawkins gorgeously envisions what might have taken place during those early-career meetings.
“Tennessee Williams and William Inge make a tragic duo for the ages… It’s a beautiful play, equal parts Williams, Inge, and Dawkins himself—a stiff, intoxicating cocktail that knocks you flat on your back and leaves you there… it is utter, tragic perfection.” —Time Out Chicago. “THE GENTLEMAN CALLER is a beautiful piece of work. Its examination of two of America’s most lyrical playwrights is itself poetic and artful; one can hear echoes of both real men’s plays…Knowing the playwrights does help, but it isn’t by any means necessary; Dawkins provides all of the needed background within the script. But he doesn’t allow the play to become bogged down by the elegance of its lines; rather, he couches everything in (often dark) humor…It’s a remarkable work about remarkable classic playwrights from a pretty remarkable Chicago playwright.” —ChicagoOnStage.com. “…[a] richly evocative play…Dawkins, whose previous work includes such memorable plays as CHARM…has a terrifically acerbic, winningly naughty sense of humor that comes paired with a deceptive passion, and this makes him ideal for channeling Williams. His insights into the differences between the celebrant and the spectator, the artist and the critic (with one who is ‘a maker of dreams’ and the other who ‘destroys by describing’), are cutting but not entirely off target.” —WTTW News.
Apply for Rights
Click here for ePlay