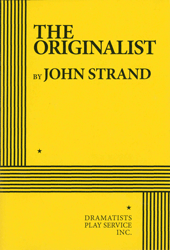 Apply for Rights
FEE: $100 per performance.
THE STORY: When a bright, liberal, Harvard Law School graduate embarks on a nerve-wracking clerkship with fearsome conservative Supreme Court Justice Antonin Scalia, she discovers him to be both an infuriating sparring partner and an unexpected mentor. John Strand’s critically acclaimed drama depicts passionate people risking heart and soul to defend their version of the truth. What does it cost us to suppress our fear and distrust, take a step toward the middle, and sit down with the monsters?
“…a timely, almost revolutionary work.” —The Economist. “Now the country’s most famous legal showman has gotten his show…Mr. Strand writes lively, fluid dialogue, particularly for Scalia, who gets the best jokes and jabs…” —NY Times. “The mission of THE ORIGINALIST is to get people to listen… it may be that rare play of political ideas that can woo audiences in territory marked blue, red or purple… You feel the force of the ideas, the bedrock of thought and of principle, even if you disagree.” —Washington Post. “[THE ORIGINALIST] depicts robust, aggressive, passionate disagreement in a context of respect and developing friendship. It accepts power and winning as measures of success, but decency and kindness as even more important measures of a person. In that regard, it feels like a play we need right now.” —Chicago Sun-Times. “THE ORIGINALIST is a meditation on Scalia’s judicial philosophy as he intellectually spars with Cat, his liberal law clerk. Their exchanges—cutting, fierce and comical—speak to the nation’s rancor in an era when even the Supreme Court has been tainted by allegations of partisan politics… the back and forth between the two is reminiscent of the snappy dialogue in Spencer Tracy and Katharine Hepburn films.” —LA Times.
Apply for Rights
Click here for ePlay