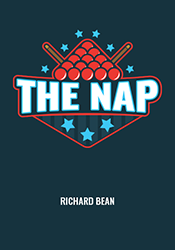 THE STORY: Dylan Spokes is a fast-rising and highly principled star in the world of snooker. When the authorities warn him about the consequences of match-fixing, he vows he would never compromise his values for an unearned win or loss. Suddenly, Dylan is thrust into a mysterious gambling ring by a colorful cast of delinquents, including a renowned gangster, his quick-tongued manager, and his own less ethically concerned family. Events spiral until Dylan is forced to negotiate his principles and his loyalty in the middle of the championship tournament. Full of twists, turns, and hilarious misunderstandings, THE NAP is a rollicking trip through the underground world of snooker.
“…there’s nothing more therapeutic than a tickling session at the theater…the sort of tickling administered by a team of master farceurs who frisk you into a state of sustained laughter, as involuntary and contented as the purr of a kitten at play. It’s the noise being artfully coaxed from audiences by the British dramatist Richard Bean. …[THE NAP’S] success is achieved not by sustained assault but by dexterity, and by always keeping the other guy (in this case, the audience) off guard.” —The NY Times

“There’s…something mysteriously appealing in entering the world of this pub-popular sport, here set in Sheffield, England, ground zero for snooker championships. Add high stakes, lowlifes and a wicked wit, and you’ve got a solid win.” —Variety

“…glorious, nail-biting, theatrical fun. …Richard Bean’s smart play is crammed with eccentric entertainment, and I was potted (can this be the verb?) from the first.” —The Guardian (UK)
Apply for Rights
Click here for ePlay