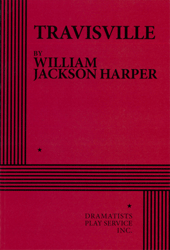 Apply for Rights
FEE: $100 per performance.
THE STORY: In 1960s Texas, one city has so far avoided the tumult of the Civil Rights movement. Through the efforts of an alliance of black church leaders, a wary peace has been maintained with the city’s white mayor and citizens. But when the mayor partners with a private developer to gentrify the black neighborhood and uproot its residents, and a movement organizer from Atlanta comes to town, the Minister’s Alliance will need to choose between the nonconfrontational status quo and standing up for the interests of their community—and weathering the risks resistance incurs.
“…[TRAVISVILLE] is a polished jewel of writing…The play doesn’t wring its hands; it interrogates a moment in history, populated not by heroes and villains but real people negotiating dangerous quandaries.” —TheDailyBeast.com. “[TRAVISVILLE] takes place in 1964, but its preoccupations have…contemporary resonance: What is the best way to carry out change? When does negotiation turn into collaboration, especially compared to disruptive activism? …Mr. Harper has serious writing chops… ” —NY Times. “…[a] terrific drama…[Harper] write[s] fine dialogue [and] he has a precise touch for characterization. What’s most exciting is how well he orchestrates the pressures of event and argument: His whole created world breathes.” —Time Out (New York). “Harper shows a knack for colorful dialogue throughout: funny at unexpected moments, eloquent during serious ones…most impressive about TRAVISVILLE, however, is Harper’s clearheaded willingness to embrace the agonizing complexities of his subject…A humane attention to real-world nuance infuses Harper’s play with genuine emotional stakes beyond the political strategizing…” —TheaterMania.com.
Apply for Rights
Click here for ePlay