The Panties, The Partner, and The One Percent: Scenes from the Heroic Life of the Middle Class 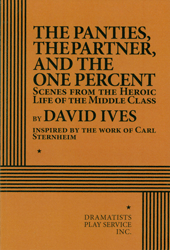 inspired by the work of Carl Sternheim

THE STORY: The apocalypse is imminent in David Ives’ three-part reworking of Carl Sternheim’s Scenes from the Heroic Lives of the Middle Classes. Leaping through time, we visit three generations of the Mask family: from a household in 1950s Boston, to 1987 Wall Street, all the way to a modern techie home in the Pacific Palisades. Capitalism is on trial, secrets are exposed, and existentialism runs in the family in this rambunctious satire for the ages.
“…curiously clever and titillating…If you enjoyed Ives’ ‘translaptations’ of French comedies—The Metromaniacs, The Liar and The School for Lies—you will fall hard for this riotous gem.” —WhiskandQuill.com. “Ives…has penned a hilarious and thought provoking social commentary that is perfect comic fare…” —Prince George’s Sentinel (Maryland).
Apply for Rights
Click here for ePlay