The Courtroom: A Reenactment of One Woman’s Deportation Proceedings 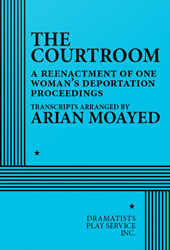 THE STORY: Elizabeth Keathley, a Filipina immigrant, entered the United States on a K-3 visa to live with her husband, a U.S. citizen. When applying for her driver’s license at an Illinois DMV, Keathley inadvertently said “yes” to the form question of registering to vote, and subsequently received a voter registration card in the mail. With this card, Keathley voted in a midterm congressional election, violating U.S. election law. When the mistake was discovered at her citizenship hearings, the Department of Homeland Security ordered her deportation. Elizabeth Keathley’s case went from Chicago Immigration Court all the way to the U.S. Court of Appeals for the Seventh Circuit. Created from verbatim transcripts, THE COURTROOM is an uncanny examination of the U.S. immigration system and one woman at its mercy.
“…this is theater as civic meditation…[THE COURTROOM] enlist[s] the spectators as witnesses, exhorting the Americans in the room to consider what our nation is doing in our name and how, if we oppose that, we intend to stop it…As the piece follows her from one courtroom…to another…what is most palpable is the suspense—how deeply invested the audience becomes in the future of this gentle woman.” —The New York Times.
Apply for Rights
Click here for ePlay