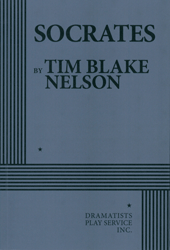 Apply for Rights
FEE: $100 per performance.
THE STORY: SOCRATES is a witty and endlessly fascinating drama about a complicated man who changed how the Western world thought. This powerful play is an intellectual thrill ride from the philosopher’s growing prominence in democratic Athens through the military and social upheavals that led to one of the most infamous executions in Western history. SOCRATES is a passionate tribute to the man who continues to inspire us to question authority and defend freedom of belief.
“Argument and inquiry are the engines of Nelson’s SOCRATES…this is a play that hums with intelligence…As the play outlines Socrates’ life and how he met his end, it shows what it looks like when a democracy responds with mortal force to someone who dares to question it, shutting him up by condemning him to death.” —NY Times. “When the ancient arguments take center stage…they’re still as pointed as knitting needles, poking illuminating holes in familiar, sanctimonious notions of democracy, morality, wisdom, and power…SOCRATES is engaging in its intellectual commitment to the rigor and nuance of its subject’s thinking…it lets us think alongside a magnificent, humane thinker, and in a world so hungry for generous, rational thought, that’s something.” —NY Magazine. “…a treasure trove of ideas bantered, tossed, shredded and otherwise analyzed…SOCRATES is hypnotically fascinating in its steady march toward its tragic denouement.” —TheatreScene.net.
Apply for Rights
Click here for ePlay