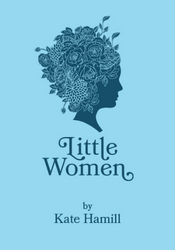 Adapted from the novel by Louisa May Alcott

THE STORY: Jo March isn’t your typical Victorian lady. She’s indecorous and headstrong, and one day she’s going to be a great American novelist. As she and her sisters grow up in the middle of the Civil War, they strive to be brave, intelligent, and imaginative young women. But as adulthood approaches, each sister must negotiate her private ambitions with society’s expectations. In a war-torn world defined by gender, class, and personal tragedy, Jo March gives us her greatest story: that of the March sisters, four dreamers destined to be imperfect little women.
“Ms. Hamill’s feminist-friendly spin on the classics never fail to sound an engagingly original note… an ingenious compassion of Alcott’s novel that is by turns funny and painfully poignant…it touched me to the heart.” —The Wall Street Journal. “…Jo has always been the most compelling character by far in Louisa May Alcott’s coming-of-age novel Little Women. In reworking it for the stage, Kate Hamill…has done the dramatically sensible thing and placed Jo at the center…the silly, malaprop-prone Amy blossoms fully into her horridness, becoming an excellent foil for Jo…Meg, [as] a frazzled young mother, gets a gorgeous scene of near despair…with just the right comic touch.” —The New York Times. “Kate Hamill’s adaptation of Little Women…is a sublime example of how to make 19th century works relevant to modern audiences. Unlike recent adaptations, which have merely transposed Alcott’s characters to different eras, but retained the book’s whiteness and outdated ‘all-American girl’ values, Hamill understands that Alcott’s core beliefs, if not her specifics, were invitations not to tea parties and cotillions, but to invite all women to revolution.” —TalkinBroadway.com.
Apply for Rights
Click here for ePlay