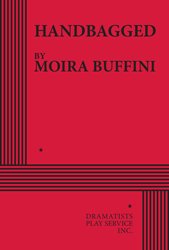 THE STORY: HANDBAGGED imagines what really happened in the private meetings between two of the world’s most powerful women: the Iron Lady, Margaret Thatcher, and Queen Elizabeth II. Born just six months apart, each leader has the capacity to change the world, but how the world should be changed is another story altogether. Will Mags and Liz find common ground in tumultuous times, or will the gloves come off at Buckingham Palace?
“[HANDBAGGED] is an evening of twinkling meta-theatre larkiness…In lesser hands this might prove irritating, but Buffini [handles] it with such delicate wit that this titanic struggle between two women of different backgrounds but of similar ages—both shaped by fathers they adored—becomes fascinating and affecting…It’s a show that cleverly explores the nature of history [and] reminds us that, while we remember the great events of our time, they tell us nothing about the everyday lives affected by the decisions of those in power.” —Guardian (UK). “If you’ve been feasting on The Crown, Moira Buffini’s delectable HANDBAGGED will skip you ahead to the Thatcher years…The title refers to being smacked with a purse, a misogynist way of describing Thatcher’s knockdown style. That’s Buffini’s real subject, and of course Thatcher’s strongman theory of law-and-order patriotism, individual responsibility and a scantly regulated business sector has its echoes now…but [Buffini] gets how [Thatcher’s] muscular magnetism attracted followers hungry for a newly great Britain.” —Washington Post. “[Queen Elizabeth II and Thatcher’s] frosty relations have been rumored for years…Like that delightful bit of royal fan-fic [The Audience], Moira Buffini’s HANDBAGGED speculates on what was said behind closed doors during the queen’s weekly audience with the prime minister…[But] Buffini succeeded in convincing me that the least interesting aspect of Thatcher’s tenure was whether or not she got along with the queen. In a culture obsessed with catfights between famous women, that’s a real accomplishment.” —TheaterMania.com.
Apply for Rights
Click here for ePlay