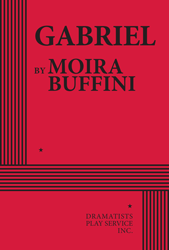 THE STORY: In Nazi-occupied Guernsey, an island in the English Channel off the coast of Normandy, the Becquet family’s home is requisitioned by SS officers. As widowed matriarch Jeanne navigates the dangerous game of Major Von Pfunz’s attraction to her, her Jewish daughter-in-law discovers a strange and beautiful man washed up on the shore. Wracked by fever, the man can remember nothing, including his own name; with equal probability he’s a downed Royal Air Force pilot or an overboarded SS officer, Jeanne’s daughters convince her to shelter him until his memory returns. But harboring this fallen Gabriel threatens the modicum of safety and stability Jeanne’s wrung from her family’s dispossession.
“[This] tense tale of wartime intrigue and romance makes for riveting watching… [Buffini’s] thoughtful writing steers clear of melodramatic cliché, grounding the play’s events in emotional truth and complex characterizations…As befits the genre [the play] concludes with a rip-snorter of a scene that springs several surprises…[and] the sheer polish, narrative dash and dramatic brio of GABRIEL got my theater-loving juices flowing again pretty quickly.” —The New YorkTimes. “Buffini takes [a] situation, pregnant with possibility, and spins more plot out of it than you can shake a fistful of sticks at, with the result that the two and a half hours glide by, the dramatic tension cranked up by eavesdropping, sudden interruptions and confrontations around every corner.” —Independent (UK). “This is a fascinating chapter of history. [T]elevision is busy plundering epic fictional ‘what-if?’s…But the fate of the Channel Islanders—effectively abandoned by the UK and treated, initially, with relative restraint by the barely resisted Germans—lies within the realm of grim fact…What’s impressive about GABRIEL, though, is its theatrical compactness and thematic complexity: it has a thriller-like plot but it also flirts with uneasy mirth, earthy romance and otherworldly inklings—into this life-and-death situation creep intimations of the supernatural.” —Telegraph (UK).
Apply for Rights