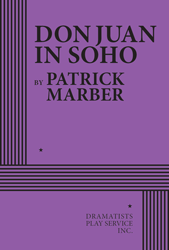 Apply for Rights
FEE: $105 per performance.
THE STORY: DJ will go to bed with anything that breathes. His lust is so unquenchable that he’s employed his friend and assistant, Stan, to organize his ever-growing digital Rolodex of partners. As the two of them romp the streets of London’s Soho seeking DJ’s next conquest, they leave a wreckage of heartbreak and betrayal in their wake. A racy twist on Molière’s Don Juan, Patrick Marber’s irresistible adaptation imagines the classic antihero in the twenty-first century, where idiocy, masculinity, and hubris still reign.
“[DON JUAN IN SOHO] can make you almost vomit with laughter—and anxiety—as it updates this archetypal erotomane…As brilliantly reconceived by Marber, the Don who gets his end away endlessly becomes one of this playwright’s personal pantheon of men who have used themselves up and are now running on empty—dangerously funny, frantic and, in their own way, fearless…In every way, a prodigious evening.” —Independent (UK). “DON JUAN IN SOHO is [an] absolute cracker…the play proves savagely funny, disturbingly dark and disgracefully sexy.” —Telegraph (UK). “…destined to be [a] crowd-pleaser—and the rudest, raunchiest, most unabashedly guilty pleasure in town.” —Hollywood Reporter.
Apply for Rights
Click here for ePlay