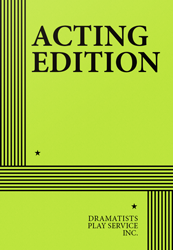 THE STORY: When a small-time football club on a losing streak brings on a promising new recruit, it seems the team may finally step back into the spotlight. But as the star rookie’s future proves lucrative for those around him, he’s thrown into a battle of principles between the team’s money-hungry manager and its caretaker still pining for the glory days. Both a love letter to the sport and an examination of its less savory traditions, THE RED LION delves behind the scenes of Britain’s most beloved pastime.
“Marber, in this riveting piece, uses the world of non-league, semi-pro football to explore issues of trust and loyalty and the larger division between individual ambition and the collective ethic…Marber has done something remarkable. He has captured precisely the reek of sweat and liniment, created three fallible characters and, without pressing the point, raised larger moral questions.” —Guardian (UK). “[Marber’s] passion, intimate knowledge and respect for the sport, is heard in every, acutely observed, line of dialogue and is seen in his splendid characterisation…[THE RED LION] is terrifically well written…” —StageReview.co.uk. “[THE RED LION] is a gritty, funny and ultimately heartbreaking work with dialogue that fair crackles along…This is a little gem.” —RadioTimes.com. “[Marber’s] choice of subject? Football. Not high-end, multi-million pound, bribery and corruption football but grass-roots, non-League, semi-pro, relatively lowly footie. In theory, this is where the honest-to-goodness passion is, but Marber, without chasing headlines, suggests that even here funny money lurks and promising youth gets tempted into foul play…It’s a triumph.” —Telegraph (UK).
Apply for Rights
Click here for ePlay