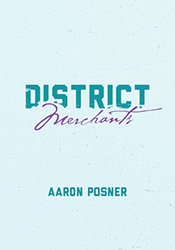 THE STORY: Love, loss, litigation, and predatory lending are examined in surprising ways in this uneasy comedy, which wades fearlessly into the endless complexities and contradictions of life in America. Set among the Black and Jewish populations of an imagined time and place that is simultaneously Shakespearean, Reconstruction-era Washington, D.C., and today, District Merchants is a remarkable tale of money, merchandise, and mercy brought to the stage by award-winning playwright and director Aaron Posner.
“As efforts go in making Shakespeare’s thornier plays more digestible, its concerns more relevant to contemporary playgoers, you’d be hard pressed to find a more admirably intelligent reworking of The Merchant of Venice than playwright Aaron Posner’s DISTRICT MERCHANTS… Posner invokes a complex social dynamic of a sort Shakespeare could never have envisioned—that of the alternately symbiotic and tense relationship of American Blacks and Jews, and their separate, powerful claims to the story of oppression.” —The Washington Post

“…Posner dexterously weaves together the interests of [the] characters, giving them all—even the ones descended directly from Shakespeare’s characters—new and fascinating personality traits. …it’s a well-balanced play, as hopeful and joyous as it is revealing of bankrupt moral systems. …While Posner doesn’t offer easy answers, the sturdy balance among his characters does create something that feels very truthful, worthwhile, and profound.” —TheaterMania.com

“DISTRICT MERCHANTS explodes with layers of complexity… Posner has faced the most problematic aspect of Shakespeare’s play here full-on: he turns the question of anti-Semitism on its head, layering in the difficult relationships between two groups historically treated as ‘Other’ in America.” —DCMetroTheaterArts.com
Apply for Rights
Click here for ePlay