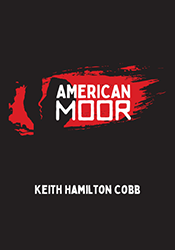 THE STORY: A seasoned African-American actor auditioning for the role of William Shakespeare’s iconic Black hero Othello must respond to the dictates of a younger white director who presumes to understand how to maximize the Black character for believability. What could possibly go wrong? A poetic exploration of Shakespeare, race, and America, not necessarily in that order.
“…some plays…take the idea of ‘necessary’ to a deeper level. …AMERICAN MOOR is one such play…a blisteringly eloquent and penetrating meditation on the ever-urgent matter of race in America—though ‘meditation’ seems far too tame a word for the dramatic force Cobb brings to the subject…” —The Boston Globe

“Cobb’s earnest, reasoned script slashes so precisely that you may not see Shakespeare—and a lot of roles played by Black performers—quite the same way for a while.” —The Washington Post

“If you go to see AMERICAN MOOR—and you should—leave any white fragility you may have at home.” —TheaterMania.com

“AMERICAN MOOR…offers a promising avenue into the future of Shakespeare performance, a conversation with the text, in a modern idiom, as opposed to a translation of it, that brings us closer to Shakespeare’s language, not further away.”—SlantMagazine.com