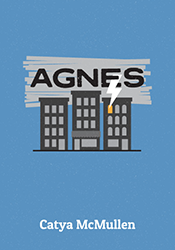 THE STORY: On the same night that Superstorm Agnes closes in on New York City, June’s brother, Charlie, returns home after a two-week disappearance that’s left her sick with worry. Charlie is on the autism spectrum, and it’s his sister’s job to look after him. Meanwhile, June’s girlfriend, Elle, is about to move to Philadelphia for medical school and wants June to come with her. And Ronan, June and Charlie’s roommate, has invited a contentious old friend to crash with them. As the storm kicks up outside, tensions in the household rise, exposing old wounds and opening new ones. With nowhere else to go, there may be no choice but to repair the broken bonds among them. Told with a unique blend of humor and heart, AGNES explores the necessity of human connection for all people, whatever the cost.
“Critic’s Pick! …tender and funny… this is an excursion into the depths of longing, examining the ties that bind too tightly and the connections that are dangerously frayed.” —The NY Times

“The revelation is the writing. The playwright Catya McMullen is a ninja—sharp, quick, crafting funny incisive dialogue. The possibility of edgy insecurity always lingers. I found myself squirming uncomfortably, laughing and feeling an at-home familiarity all at once.” —TheaterPizzazz.com
Apply for Rights
Click here for ePlay