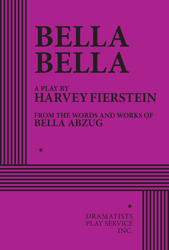 Apply for Rights
FEE: $105 per performance.
THE STORY: On one historical night in September 1976, Bella Abzug hides out in the bathroom of Manhattan’s Summit Hotel as she awaits the results of her bid to become New York’s first ever woman senator. Known for her fearless career as a lawyer, protester, and champion of gay rights, one of New York’s fiercest feminists must collect herself as her friends, family, and constituents (including the likes of Gloria Steinem, Shirley MacLaine, and others) hold their breaths just outside the door. The clock is ticking and the world is ready—just as soon as Bella is.
“Fierstein’s incarnation feels as passionately determined as its subject…Fierstein captures [Bella’s] political savvy, her fierceness, political nous, and sense of fun, wit, and mischief.” —Daily Beast. “…a lively and deeply affectionate portrait of the hat-wearing, barrier-breaking 1970s liberal firebrand.” —Time Out NY. “…Fierstein [is] an eternally captivating storyteller who sprinkles the fond salute with Yiddishisms, zingers and amusing aphorisms…The solo show also serves quite transparently as a timely reminder of the wisdom of putting women in government.” —Hollywood Reporter.
Apply for Rights
Click here for ePlay