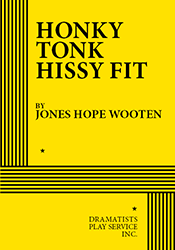 Available for Streaming!
Apply for Rights
FEE: $105 per performance.
THE STORY: In this rollicking, hilarious comedy, the Doublewide, Texas, gang is back and life in their tiny town has gotten crazier than ever! Just when things are looking up—the population has grown to seventeen mobile homes and a weekend farmers’ market—the rug is pulled out from under the residents yet again. It seems their vacation rental trailer has drawn unwanted attention from a mega-corporation in Austin. Suddenly the corporation is interested in Doublewide. Waaaay too interested. Mayor Joveeta Crumpler is the only one suspicious enough to sound the alarm, but no one is listening. Her mother, Caprice, is too self-involved with her “career” as a local celebrity to sense the growing threat, or to even realize that grumpy old Haywood Sloggett is increasingly drawn to her—and Sloggett is fighting those romantic feelings tooth and nail. Caprice is also hell-bent on keeping her neighbor and rival, Big Ethel Satterwhite, from horning in on her domain—the Stagger Inn bar. Big Ethel has her hands full trying to teach the town’s good-ol’-boy police chief, Baby Crumpler, how to dirty-dance for a countywide competition. But Baby’s got as much chance of winning as Georgia Dean Rudd has of not jinxing her relationship with Nash Sloggett—she’s twisting herself into knots trying to dodge his constant marriage proposals. And as the danger to the town grows, Joveeta can’t even count on the usually reliable and sweet health fanatic Lark Barken—because she’s currently under the spell of a demon she’s only recently discovered: caffeine. But as the tentacles of the corporation envelope them all, can the citizens of this little Texas town put aside their problems and unite behind Joveeta to fight “the big guys” and turn the tide in Doublewide? A heap of hilarity with a whole lot of heart—and a stand-alone play in its own right—HONKY TONK HISSY FIT is the third comedy in the trilogy that begins with Doublewide, Texas and continues with A Doublewide, Texas Christmas. By the triumphant finale of this ferociously funny Jones Hope Wooten comedy (Could there be a double wedding in Doublewide?), you’ll be throwing fits, alright—fits of laughter that’ll make your sides ache!
Apply for Rights
Click here for ePlay
Download Logo