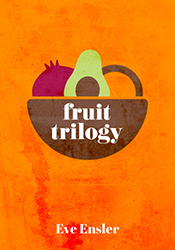 THE STORIES: A play that speaks to these explosive times and charts the journey of women, from the disembodiment that comes from violence to the embodiment that comes from self-love. From the Tony Award–winning author of The Vagina Monologues, The Good Body, and In the Body of the World comes three short plays that give a voice to defiant, ordinary women: POMEGRANATE—two women for sale, another morning on the shelf; AVOCADO—a young woman on her chaotic, shocking journey toward freedom; and COCONUT—from the bliss of her bathroom, a woman connects with the one thing she has never fully owned…her body. Woven together with dark humor and heightened theatricality, FRUIT TRILOGY explores the humanity behind the headlines.
“Few people write about what Eve Ensler writes about, and none write the way she does…FRUIT TRILOGY is an honest, unflinching look at the way women’s bodies are commodified (bought and sold as though they’re produce), violated, and—with great difficulty, courage, and strength—eventually accepted by their owners…a significant piece that shouldn’t be ignored…” —TheaterMania.com. “…Eve Ensler’s latest is a harrowing but unmissable theatre experience…It is the show’s climatic piece COCONUT, however, that will linger long in the memory…this is much more than provocative theatre. Instead, COCONUT challenges our ideas of bodily discovery, embracement and ownership, and it makes for powerful viewing…This is stark, brutal, emotive theatre…FRUIT TRILOGY is nothing less than compelling.” —TheStateoftheArts.com. “Ensler is articulate, specific, ambitious, and brave…There’s no way to prepare for the arsenal of visions conjured and feelings invoked by Ensler’s brutal, lucid prose…The artist employs every aspect of herself to spellbinding effect.” —WomanAroundTown.com.
Click here for ePlay
Apply for Rights