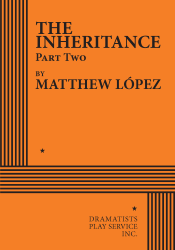 “Intended to be performed side by side with The Inheritance, Part One” THE INHERITANCE, PART ONE

THE STORY: Winner of the 2020 Tony Award for Best Play. Winner of the 2020 Drama Desk Award for Best Play. Winner of the 2019 Olivier Award for Best Play. Picking up where PART ONE ended, THE INHERITANCE, PART TWO takes its characters on roller-coaster journeys of self-discovery, self-deception, and self-destruction. Eric, reeling from his discovery at Walter’s house, finds himself growing even closer to Henry—while Toby tumbles down a dark hole of celebrity and addiction as he runs from a hidden past that will inevitably catch up with him. And the young man Leo, returning to Toby’s life and Toby’s bed, discovers a world of books—in particular the works of E.M. Forster—that open up a new realm of life to him, but at the same time finds himself in more danger than before. All three lives intersect as they are faced with the decision to heal or to burn. Inspired by E.M. Forster’s Howards End, THE INHERITANCE is an epic examination of survival, healing, class divide, and what it means to call a place home.
“…the most important American play of the century…” —Telegraph (UK). “THE INHERITANCE…is a major work of contemporary theater, the rare play that matches its breathtaking imaginative breadth with equal measures of dramatic ingenuity and electrifying emotional power. [It] almost establishes a new genre unto itself: It’s an intricately textured admixture of drama and novel that draws on both the fluid lyricism of prose and the crispness of smart, lively dialogue…” —BroadwayNews.com. “López knows how to work an audience…There are moments when the emotion is so genuinely overpowering that the entire audience is stricken into a sobbing unity…a river of compassionate feeling…” —LA Times. “…the depth of feeling in López’s drama is frequently ravishing and the writing utterly gorgeous…The play is both wonderfully funny and exquisitely poignant, but its real achievement is the deft hand with which it connects multiple generations of gay men, underscoring the importance of sharing stories and keeping the past alive.” —Hollywood Reporter. —METRMAG. “…it feels like a universal call to live vibrantly and thoroughly and to consider what we owe to the generations that come before or after.” —WBUR. “…its authoritative delivery offers new insights along with familiar emotional impact.” —New York Stage Review.
Apply for Rights
Click here for ePlay