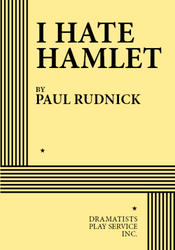 MIN. PERFORMANCE FEE: $130 per performance. SPECIAL NOTE: Cue sheet containing the original music composed by Kim Sherman for this Play is available through the Play Service. The cost is $20.00, and the music will be distributed digitally. To include this music in your production, you must complete the Optional Production Materials Rights Application. The nonprofessional fee for the use of this music is $15.00 per performance.

THE STORY: Andrew Rally seems to have it all: celebrity and acclaim from his starring role in a hit television series; a rich, beautiful girlfriend; a glamorous, devoted agent; the perfect New York apartment; and the chance to play Hamlet in Central Park. There are, however, a couple of glitches in paradise. Andrew’s series has been canceled; his girlfriend is clinging to her virginity with unyielding conviction; and he has no desire to play Hamlet. When Andrew’s agent visits him, she reminisces about her brief romance with John Barrymore many years ago, in Andrew’s apartment. This prompts a seance to summon his ghost. From the moment Barrymore returns, dressed in high Shakespearean garb, Andrew’s life is no longer his own. Barrymore, fortified by champagne and ego, presses Andrew to accept the part and fulfill his actor’s destiny. The action becomes more hilarious with the entrance of Andrew’s deal-making friend from LA, spouting the laid-back hype of the Coast and offering Andrew a fabulous new TV deal worth millions of dollars. The laughs are nonstop as Andrew wrestles with his conscience, Barrymore, his sword, and the fact that he fails as Hamlet in Central Park.
A young and successful television actor relocates to New York, where he rents a marvelous, gothic apartment. With his television career in limbo, the actor is offered the opportunity to play Hamlet onstage, but there’s one problem: He hates Hamlet. His dilemma deepens with the entrance of John Barrymore’s ghost, who arrives intoxicated and in full costume to the apartment that once was his. The contrast between the two actors, the towering, dissipated Barrymore whose Hamlet was the greatest of his time, and Andrew Rally, hot young television star, leads to a wildly funny duel over women, art, success, duty, television, and yes, the apartment. “…fast-mouthed and funny…It has the old-fashioned Broadway virtues of brightness without pretensions and sentimentality without morals.” —Village Voice. “…unapologetically silly and at times hilarious…affectionately amusing about the theatre…” —NY Times.
Apply for Rights
Incidental Music