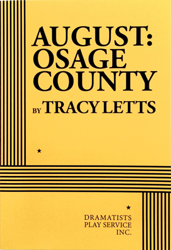 MIN. PERFORMANCE FEE: $130 per performance. SPECIAL NOTE ON SONG: The song "Lay Down Sally" is required for production; an additional fee of $20.00 per nonprofessional performance will be added. SPECIAL NOTE ON MUSIC: Original music by David Singer for the Broadway production is available through the Play Service. The cost is $20.00, and the music will be distributed digitally. To include this music in your production, you must complete the Optional Production Materials Rights Application. The nonprofessional fee for the use of this music is $20.00 per performance.

THE STORY: A vanished father. A pill-popping mother. Three sisters harboring shady little secrets. When the large Weston family unexpectedly reunites after Dad disappears, their Oklahoman family homestead explodes in a maelstrom of repressed truths and unsettling secrets. Mix in Violet, the drugged-up, scathingly acidic matriarch, and you’ve got a major play that unflinchingly—and uproariously—exposes the dark side of the Midwestern American family.
Winner of the 2008 Pulitzer Prize and Tony Award. “I’d bet the farm that no family has ever been as unhappy in as many ways—and to such sensationally entertaining effect—as the Westons of AUGUST: OSAGE COUNTY, a fraught, densely plotted saga of an Oklahoma clan in a state of near-apocalyptic meltdown. Fiercely funny and bitingly sad…[a] turbo-charged tragicomedy…” —NY Times. “In Tracy Letts’ ferociously entertaining play, the American dysfunctional family drama comes roaring into the twenty-first century with eyes blazing, nostrils flaring and fangs bared, laced with corrosive humor so darkly delicious and ghastly that you’re squirming in your seat even as you’re doubled-over laughing. A massive meditation on the cruel realities that often belie standard expectations of conjugal and family accord—not to mention on the decline of American integrity itself.” —Variety. “Tracy Letts creates a hugely ambitious, highly combustible saga that will leave you reeling. AUGUST: OSAGE COUNTY may make you think twice about going home for the holidays…it’s a great big exhilarating gift.” —NY Daily News. “Packed with unforgettable characters and dozens of quotable lines, AUGUST: OSAGE COUNTY is a tensely satisfying comedy, interspersed with remarkable evocations on the cruelties and (occasional) kindnesses of family life.” —NY Sun. “This is a play that will leave us laughing and wondering, shuddering and smiling, long after the house lights come back on.” —NY Newsday. “This original and corrosive black comedy deserves a seat at the dinner table with the great American family plays.” —Time Magazine.
Apply for Rights
Click here for ePlay
Incidental Music