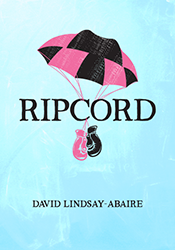 THE STORY: A sunny room on an upper floor is prime real estate in the Bristol Place Senior Living Facility, so when the cantankerous Abby is forced to share her quarters with new-arrival Marilyn, she has no choice but to get rid of the infuriatingly chipper woman by any means necessary. A seemingly harmless bet between the old women quickly escalates into a dangerous game of one-upmanship that reveals not just the tenacity of these worthy opponents, but also deeper truths that each would rather remain hidden.
“A show to treasure. David Lindsay-Abaire’s ripping Ripcord is a deeply satisfying and vastly entertaining story of two elderly women thrown together by a comic cosmic force possessed of a wicked sense of humor…With Lindsay-Abaire—a shape-shifting writer of always humanist works—nothing ever happens merely for its own sake. There are deeper issues lurking below the comedic surface…that gradually build from belly laughs to something more emotionally nutritious.” —Deadline. “David Lindsay-Abaire’s tastily sweet-and-sour RIPCORD is great fun!...Solidly crafted, the play is larded with moments of surprise, both wacky and more substantial. When the play gets serious, it’s genuinely moving. Beyond the high jinks, RIPCORD offers a compelling look at the pleasure of a challenge and the challenge of finding pleasure.” —Time Out (New York). “David Lindsay-Abaire took a serious turn with his shattering 2007 Pulitzer Prize winner, Rabbit Hole…But the plays that first put him on the map were bittersweet comedies from the Christopher Durang school of the absurd…[RIPCORD] signals a detour back to the territory of his earlier work…there’s no shortage of funny lines and inspired moments of physical comedy…” —The Hollywood Reporter. “The author of comedy-dramas that toy with sitcom expectations but then veer elsewhere, [David Lindsay-Abaire] is obviously riffing, in RIPCORD, on television templates like The Golden Girls…[It’s a] play that flirts with surrealism…but because he writes such good scenes it’s nevertheless heartbreaking and hopeful, suggesting the possibility that, even in old age, people can make choices that may produce a gentler landing.” —NY Magazine.
Apply for Rights
Click here for ePlay
Sound Design