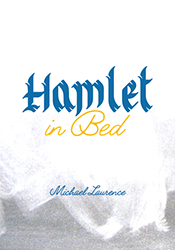 THE STORY: Michael, a troubled actor abandoned at birth, is obsessed with two things: finding his real mother, and playing the famous Gloomy Dane. His twin fixations collide when he tracks down Anna May Miller, a reclusive former actress turned barfly who may or may not be his actual birth mother, and lures her into a noir production of Hamlet playing his mother, the queen. Rehearsals for the famous “closet scene” expose their frayed inner lives as Anna and Michael hurtle ever closer to the difficult truth of their relationship. HAMLET IN BED is a twisty, kaleidoscopic story about what it means to live a life in the theater, both a generation ago and now. And about families—the ones we’re born into, and the ones we find along the way.
“Four stars, Critic’s Pick… [Anna] channels multiple archetypes of womanhood at the same time… For her, the rest isn’t silence, it’s a primal scream.”—Time Out NY

“HAMLET IN BED is a genre-defying work… [with] compelling characters. In the end, [Michael and Anna] are just a pair of lost souls with loose screws and life wounds who want nothing more than to find a home. Who couldn’t relate to that?” —TheaterMania.com

“‘Clever’ morphs to ‘profound’ as film noir narration counterpoints with spoken word and played scenes… fascinating and engaging… The conceit is brilliant… This is a complicated and deeply rich script that lingers with the audience long after the curtain call…” —OnstageBlog.com
Apply for Rights
Click here for ePlay