Sam and Dede, or My Dinner with André the Giant 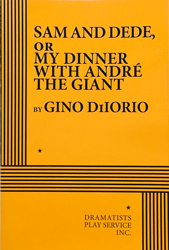 Apply for Rights
FEE: $100 per performance.
THE STORY: True story: twelve-year-old André the Giant, already well over six feet tall and 240 pounds, didn’t fit on the school bus. André’s neighbor, feeling sorry for the boy, offered to drive him to school in his truck. The neighbor was Samuel Beckett. Out of that bit of trivia comes SAM AND DEDE, OR MY DINNER WITH ANDRÉ THE GIANT, imagining a number of scenes between a giant who cannot hide, and a writer obsessed with silence.
“Fans of professional wrestling and absurdist drama have a show to call their own…an affectionate tribute to a stage goliath and a grappler built like a butte.” —NY Times. “DiIorio has wisely treated the two characters more as archetypes of Intellect vs Body rather than specific historical personages. As a result, the play works beautifully as an exploration of human types and ideals.” —TheatreStorm.com. “Rarely have I been to a play where I had so much regret that the end had arrived. I so wanted Sam and Dede just to keep on meeting and talking…largely about not much at all and yet about everything…Gino DiIorio [has] produce[d] a winner that even in its first production, feels pretty perfect.” —TheatreEddys.com. “DiIorio’s dialogue sparkles with Beckett-style remarks while these two ‘giants’ of the literary and wrestling worlds converse. The imaginary meetings involve conversations that are intelligent, witty, and bright.”
Apply for Rights
Click here for ePlay