Abe Lincoln and Uncle Tom in the White House 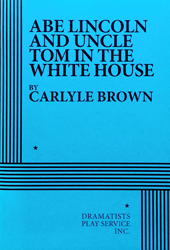 THE STORY: Alone in the Executive Office, President Abraham Lincoln is struggling with signing the Emancipation Proclamation when he is mysteriously visited by Uncle Tom, the fictional character in Harriet Beecher Stowe’s abolitionist novel Uncle Tom’s Cabin; or, Life Among the Lowly. These two iconic characters from life and literature—one real, the other fiction—attempt to understand each other across a chasm of race in the midst of the Civil War. Throughout one late night and into the dawning day, they find themselves crossing over into each other’s world in a tale of suffering, self-discovery, and redemption.
“[A] meaty and ingenious one-act…a crafty conversation, based on an absurd setup, on freedom and slavery, on war and faith…[Brown] is a master of this type of interrogation of historical figures…In ABE LINCOLN, he shows the historical power of Uncle Tom…even as he attempts to rescue him from being a byword for betrayal. This Uncle Tom is a man of providence and progress…ABE LINCOLN, which packs a punch in 75 minutes, [is] excellent work that is not to be missed.” —Star Tribune (Minneapolis, MN).
Apply for Rights
Click here for ePlay