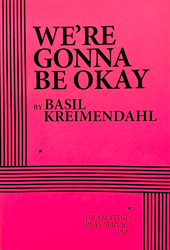 THE STORY: During the Cuban Missile Crisis, two average American families build a slapdash bomb shelter on their shared property line. With nuclear warfare looming, they wonder: Is it the end? The end of baseball…and table manners…and macramé? But as they fret about the fall of civilization, they start to worry that something more personal is at stake. A slyly hilarious, compassionate look at anxiety in America, WE’RE GONNA BE OKAY is about finding the courage to face who we are—and who we want to be.
“[WE’RE GONNA BE OKAY] finds comedy in [an] age of fear…Kreimendahl’s play wrestles with the fears we all have about the larger powers in charge but beyond our control, while offering characters who seek to find the gentle, delightful and dynamic experiences of what makes life momentous and worth living—even amid that fear and loss.” —Louisville Courier-Journal. “The script is sharp and funny, playing with 1960s stereotypes while not becoming mired in a Leave It to Beaver satire…WE’RE GONNA BE OKAY asks audiences…who we might truly let ourselves be, deep underground.” —WFPL News (Louisville, KY).
Apply for Rights
Click here for ePlay