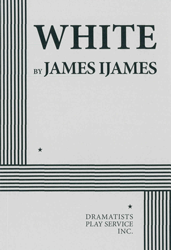 THE STORY: Gus is an artist. Vanessa is an actress. Gus wants to be presented in a major exhibition for artists of color, so he hires Vanessa to perform as Balkonaé Townsend, a brash and political artist that will fit the museum’s desire for “new voices.” Everything is great, until Balkonaé takes over and Gus has to deal with the mess he’s made. This plays spins out of control as it explores issues of race, gender, sexuality, and art.
“This funny…work draws on both life and art to examine racial tourism, power, and identity… WHITE bursts with humor…the best of which come at the expense of the institutionalization of art… The ending adds a surreal twist, driving home Ijames’ exploration of black women’s exploitation by feminism, by contemporary culture, and by white women.” —Philadelphia Inquirer. “Much of Ijames’ new play…unspools as a sharp examination of white privilege, especially as it pertains to creation, representation, and exhibition in the art world. But thanks to skillful writing and one of the most perfectly executed red herrings I’ve ever seen, WHITE morphs into possibly the strongest theatrical statement on the commodification of black bodies since Suzan-Lori Parks’ Venus.” —Phindie.com. “WHITE is pure gold…Ijames’ audacious and hilarious play takes on racism, sexism, and a handful of other isms…It’s bold, outlandish, insightful, and exciting…a sharp deconstruction of racial, ethnic, gender and social stereotypes, examined from multiple points of view…Subverting expectations, cracking wise and opening eyes, WHITE is quite a statement. Ijames fills it with twists, right up to its final moments. You’ll want to be along for the ride.” —DCMetroTheaterArts.com.
Apply for Rights
Click here for ePlay