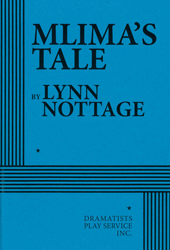 Apply for Rights
FEE: $105 per performance.
THE STORY: Mlima is a magnificent elephant trapped by the underground international ivory market. As he follows a trail littered by a history of greed, Mlima takes us on a journey through memory, fear, tradition, and the penumbra between want and need.
“Those of you who don’t believe in ghosts are likely to think again after seeing MLIMA’S TALE, Lynn Nottage’s beautiful, endlessly echoing portrait of a murder and its afterlife… Each character, inhabiting a rung on an ascending ladder of power, is very clearly defined but without grotesque caricature… [Nottage] packs a wealth of cultural, political and economic detail into each scene, from Maasai superstitions to the statistics of the illegal ivory trade.” —NY Times. “[MLIMA’S TALE] is yet another towering American drama. While the play bears little relation to The Emperor Jones, it shares the relentless urgency and pulse of O’Neill’s 98-year-old masterwork…after Ruined and Sweat and MLIMA’S TALE, we might well start to discuss O’Neill and Nottage in tandem.” —NYStageReview.com. “The world Nottage has brought to the stage is rich with detail, its characters complex and engaging.” —Time Out NY. “Eighty straight minutes of searing brilliance, MLIMA’S TALE makes a strong argument for plausible deniability as a luxury far greater than ivory, afforded to only the most privileged.” —TheaterMania.com.
Apply for Rights
Click here for ePlay