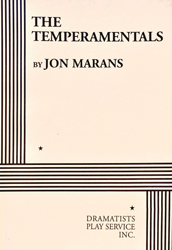 MIN. PERFORMANCE FEE: $105 per performance. SPECIAL NOTE ON MUSIC: An optional CD containing instrumental recordings of “God Save Us Nelly Queens” and the Act Two “Turnip” music performed on the recorder is available through the Play Service for $20.00, plus shipping and handling. There is no additional fee for the use of this music in performance.

THE STORY: “Temperamental” was code for “homosexual” in the early 1950s, part of a created language of secret words that gay men used to communicate. THE TEMPERAMENTALS tells the story of two men—the communist Harry Hay and the Viennese refugee and designer Rudi Gernreich—as they fall in love while building the first gay rights organization in the pre-Stonewall United States.
“Intellectual, emotional and sexual.” —NY Times. “Combines savvy context and ascending flights of bittersweet fabulousness.” —NY Newsday. “Fascinating, entertaining and emotionally affecting.” —Associated Press. “With style and a sense of humor, THE TEMPERAMENTALS mixes politics with campy comedy and unexpected bursts of emotional candor.” —Time Out NY.
Apply for Rights
Click here for ePlay
Incidental Music