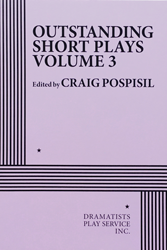 Apply for Rights
FEE: $35 per performance for each play.
THE STORIES: 52ND TO BOWERY TO COBBLE HILL, IN BROOKLYN by Chiara Atik. Halle hails a taxi after a party, when Alison, her aggressively bubbly friend, pushes into the cab too. It’s clear Halle didn’t want to ride with her, but she puts up with it until Alison asks if she’s mad at her, so Halle comes right out and tells her “I just don’t like you very much.” (2 women.) ANNIVERSARY SEASON by Jenny Lyn Bader. Zoe and Matt got married during hurricane season, and each year when their anniversary rolls around they seem to battle each other or prepare for another storm. Will their marriage last? Will they remember their anniversary? Will the power be knocked out again? (1 man, 1 woman.) CAPTURING THE FORT by Arlene Hutton. Carrie and Michael are US Marines on security duty in a desert war zone. They would seem to have little in common. Michael seems to be “one of the boys,” and Carrie is married with a husband back home. But with little to do but talk, these two soldiers begin to connect. (1 man, 1 woman.) CARRIE & FRANCINE by Ruby Rae Spiegel. Carrie, 13, asks her friend Francine to help her get ready for a make-out session at a bar mitzvah. Having seen too many Girls Gone Wild videos, Carrie thinks she’s the right age to go wild herself. These girls can be cruel and talk like truck drivers, but there’s an odd innocence to them as well. And somehow, they may be okay in the end. (3 women.) DISSONANCE by Craig Pospisil. Tricia returns to the Berkshires to deal with her mother’s death following a battle with Alzheimer’s, but at the funeral home she collides with Fitz, a prodigy and former piano student of her mother’s, with secrets of his own, who challenges her choices. (1 man, 1 woman.) INTO YOU by Lee Blessing. A week after being drugged and raped at a frat party, Molly brings home a drunken man from another party. She doesn’t know him. She doesn’t know who raped her. But she plans to exact her revenge on him. (1 man, 3 women.) MERCURY IS PERPETUALLY IN RETROGRADE SO STOP WORRYING ABOUT IT by Kara Lee Corthron. Polly’s life is great. Her mother just sent her two tickets to Wicked. What could go wrong? Then her boyfriend breaks up with her. And her best friend does too. And her mother changes her phone number. And that’s just the start of things… (1 man, 3 women.) NAPOLEON IN EXILE by Daniel Reitz. A single mother, sick with cancer, struggles to talk to her low-functioning twenty-five-year-old son with Asperger’s about how he might take care of himself when she’s gone. (1 man, 1 woman.) ON THE MENU by Rob Ackerman. A mother tries to talk to her fourteen-year-old daughter about sex before she goes off to culinary camp for the summer. The daughter—of course—wants nothing to do with this conversation. But her mother persists, until the daughter finds a way to turn the tables on her. (2 women.) RULES OF COMEDY by Patricia Cotter. Caroline is really, really not funny. Which is why she hires Guy, a stand-up comedian with some hang-ups of his own, to teach her how to tell jokes. But it turns out that they both have things to learn from one another, about life as well as laughter. (1 man, 1 woman.) A SWEET AND BITTER PROVIDENCE by Julia Jordan. Late at night, outside their father’s hospital room, Molly, Grace, and Lucy argue about which of them should tell their brother Sam to break up with “that girl” they can’t stand. It seems catty, but they love their brother and their family. And they may be right. (1 man, 3 women.)
Apply for Rights
Click here for ePlay