All in the Timing, Six One-Act Plays 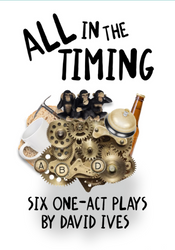 THE STORIES: SURE THING. Two people meet in a cafe and find their way through a conversational minefield as an offstage bell interrupts their false starts, gaffes, and faux pas on the way to falling in love. (1 man, 1 woman.) WORDS, WORDS, WORDS recalls the philosophical adage that three monkeys typing into infinity will sooner or later produce Hamlet and asks: What would monkeys talk about at their typewriters? (2 men, 1 woman.) THE UNIVERSAL LANGUAGE brings together Dawn, a young woman with a stutter, and Don, the creator and teacher of Unamunda, a wild comic language. Their lesson sends them off into a dazzling display of hysterical verbal pyrotechnics—and, of course, true love. (2 men, 1 woman.) PHILIP GLASS BUYS A LOAF OF BREAD is a parodic musical vignette in trademark Glassian style, with the celebrated composer having a moment of existential crisis in a bakery. (2 men, 2 women.) THE PHILADELPHIA presents a young man in a restaurant who has fallen into “a Philadelphia,” a Twilight Zone-like state in which he cannot get anything he asks for. (2 men, 1 woman.) VARIATIONS ON THE DEATH OF TROTSKY shows us the Russian revolutionary on the day of his demise, desperately trying to cope with the mountain-climber’s axe he’s discovered in his head. (2 men, 1 woman.)
Winner of the John Gassner Playwriting Award. This critically acclaimed, award-winning evening of comedies combines wit, intellect, satire and just plain fun. A hilarious sextet whether played together or separately. “Like sketches for some hilarious, celestially conceived revue. The writing is not only very funny, it has density of thought and precision of poetry…ALL IN THE TIMING is by a master of fun. David Ives spins hilarity out of words.” —NY Times. “Theatre that aerobicizes the brain and tickles the heart. Ives is a mordant comic who has put the 'play’ back in playwright…A wondrous wordmaster.” —Time Magazine. “An original turn of mind is to be saluted in our tired theatre…A playwright with ideas, his own ideas, in his head is relatively rare. Such a one is David Ives.” —NY Magazine.
Apply for Rights