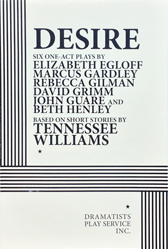 FEE: $105 per performance when produced together; $40 each when produced individually.
THE STORIES: ATTACK OF THE GIANT TENT WORMS. Billy and Clara are nearing the end of their summer vacation on Cape Cod, as their cottage is being devoured by billions of tent-worms. Worse, Billy has just gotten word from his oncologist that there are no more treatment options for his brain cancer. A darkly humorous exploration of which is more terrifying: bugs or death? (1 man, 1 woman.) DESIRE QUENCHED BY TOUCH. In 1950s New Orleans, a black masseur must account for the disappearance of his favorite white customer. People don’t just vanish inside massage parlors… (3 men.) THE FIELD OF BLUE CHILDREN. Everything in Layley’s life is going according to plan. She belongs to the best sorority at her university and has a devoted boyfriend who could easily become a devoted husband. But Layley suspects that there is more to life than stifling conformity. So she signs up for a poetry class in the hopes of expressing herself. There she meets Dylan, a sensitive poet with whom she enjoys a night of passion that opens up a truly revolutionary prospect: living a life of her own. (3 men, 4 women.) ORIFLAMME. Oriflamme (noun): A red or scarlet banner; a knight’s standard; a rallying principle…Sickly Anna Kimball, on her final day, reaches out for, and becomes, all of these. (1 man, 1 woman.) YOU LIED TO ME ABOUT CENTRALIA. Jim, the Gentleman Caller, leaves the Wingfields’ disastrous dinner party to meet his fiancée Betty’s train. The evening won’t turn out the way either of them expected. (1 man, 1 woman.) THE RESEMBLANCE BETWEEN A VIOLIN CASE AND A COFFIN. Tom and his sister Roe’s childhood comes to a painful end when Richard Miles, who moves in light, arrives in town with his violin in a case. (2 men, 4 women.)
“…You can hear Tennessee Williams’s dramatis personae echoing through this evening of one-acts…” —New Yorker. “[DESIRE] is rife with agonized sexual longing, trembling Southern belles and spasms of violence…Most American playwrights working today owe some debt to Williams; it’s a pleasure, even inspiring, to see six give back.” —Time Out NY.
Apply for Rights
Click here for ePlay