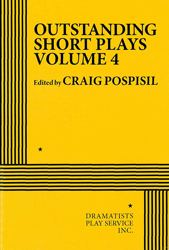 FEE: $40 per performance for each play.
THE STORIES: BROWN by Cherie Vogelstein. Peter is in the middle of a job interview. It’s a little shaky at first, but Ira, Maurie, and Mary seem to like him and to be impressed that he went to Brown. But then they ask him—hypothetically—if he’d rather sleep with a dog or his mother. And that’s when things get really strange. (3 men, 1 woman.) DOG? by Kara Lee Corthron. A man being interviewed as a prospective dog-sitter is stunned when the dog turns out to be a young woman pretending to be a dog. He doesn’t want to get involved, but then it seems this may be some role-playing game. Or is it something else? Just what’s going on here? (2 men, 1 woman.) FOR UNTO US by Stephen Kaplan. Mary and Joseph are a pair of 5-year-olds playing with a doll. But before they can start, they’ll need to debate gender stereotypes, the relative merits of Christmas versus Hanukkah, the nature of God, and what it means to have two dads. (1 man, 1 woman.) HAPPENSTANCE by Craig Pospisil. First off, Cassidy is definitely not crazy. Secondly, she is totally over her ex-boyfriend. So when she runs into Abe at a coffee shop, she totally doesn’t think about what happened between them. Or what could happen. And she totally didn’t forget that her husband Martin is sitting right next to her. Totally. (2 men, 2 women.) JACK by Melissa Ross. Maggie and George are divorced. It’s been six months, and they’re dating other people. But they’re in the middle of a huge argument outside the dog run in the park about why George didn’t call Maggie about an emergency involving Jack, the dog they adopted together at the start of their relationship. (1 man, 1 woman.) LINUS AND MURRAY by Leah Nanako Winkler. Linus is a cat who’s seen it all. Murray is a young dog, who’s newly adopted and neurotic. They share a yard, but can they get past the antiquated idea that they are mortal enemies and become friends? Can they be more than friends? (2 men.) THE PRESENTATION by Lia Romeo. Samantha, polished and professional, finishes a presentation on sexual harassment in the workplace and she opens the floor up for questions. Unfortunately, the three Vikings she’s been addressing haven’t gotten the point of her talk, especially where it concerns not raping. (3 men, 1 woman.) THE SCULPTURE GALLERY by Aoise Stratford. As Kennedy, a young woman in an art gallery, sketches lifelike sculptures of women, a man several years her senior strikes up a conversation. Jack, trading on their shared love and understanding of art, breaks down Kennedy’s barriers until she—and we—are no longer able to tell where the objectified artist’s subject begins and the person ends. (1 man, 2 women.) SHOCK AND AWWW by Dan Castellaneta and Deb Lacusta. Stewart and Patrick are roommates who agreed: No pets. So when Stewart comes home to find Patrick cuddling a kitten named Mr. Squiggy, he says the cat has to go. But Mr. Squiggy isn’t going anywhere. In fact, he’s already taken over Patrick’s mind. (2 men.) WAITING FOR THE MATINEE by Eric Coble. “Nothing to be done.” Estelle and Vivian are waiting for a show to begin, but nothing happens. They’ve read the whole program while waiting. But nothing happens. Should they go? Should they stay? Should they unwrap their candy? (2 women.)
Apply for Rights
Click here for ePlay