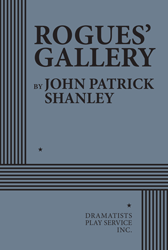 Available for Streaming!
Apply for Rights
FEE: $100 per performance when produced together; $35 each when produced individually.
All of John Patrick Shanley’s proceeds from the sales and licensing for ROGUES' GALLERY will go to The Actors Fund.

THE STORIES: Ten magnetic characters. Ten bizarre, explosive, and darkly humorous stories. This collection of monologues from the imagination of Pulitzer Prize-winning John Patrick Shanley delves into the allure of bad behavior and the absurdity of being human. UNKNOWN CALLER. “Where was the ring? I stared at the open box.” After a doomed proposal and a night of heavy drinking, a would-be fiancé wakes to a hangover and a missing engagement ring. A phone call from a stranger may hold the key to its whereabouts—and an opportunity for a fresh start. (1 man.) DRIVE. “He looked at me like I was an unexpected problem, like the day had been going fine, and I ruined it.” A cabaret singer does not like the janitor at her club, and the feeling is mutual. As she struggles to find authenticity in her performances, a sudden event brings inspiration. (1 woman.) GAUCHO. “He did not realize the kind of man I was, and that he was in danger.” An aggrieved descendant of the gauchos of Argentina seeks revenge on the man who seduced his wife. (1 man.) ARTIFICIAL LEG. “Who leaves a leg?” A homeowner struggles to dispose of the prosthetic limb he discovered in the basement of his new townhouse. (1 man.) DITTO. “I’m scared to death.” A journalist becomes infatuated with a writer, leaving her fiancé behind and diving headfirst into a blissful romance. But when a friend reaches out with an unsettling discovery, she uncovers the strange truth about her new relationship—and herself. (1 woman.) THE ACUPUNCTURIST. “She was exceptionally good at finding pain.” A patient switches acupuncturists after their practitioner starts to believe he has magical powers. (1 n/s.) THE CLERICAL LINE. “It is not enough to foresee a fashion. One must have courage.” A wealthy bachelor collaborates with Burberry to create a wardrobe of priest’s clothing—a uniform he deems most reflective of his soul and status. (1 man.) I WAS RIGHT ABOUT EVERYTHING. “I’m the fascinating one. We both know that. I’m the one a movie star would want to play.” A Bronx food cart owner and teller of tall tales bides his time until the woman he loves realizes how exceptional he is. (1 man.) LOCKDOWN. “I hate him, but I can’t leave the puppy.” During a global epidemic, a quarantined woman slips away from her boyfriend to call her lover. (1 woman.) THE CHOREOGRAPHER’S HAND. “The best way to get away with murder is don’t talk about it, and I never have.” In this longer piece, a pianist prone to visions unravels the curious sequence of events that pushed him to kill. (1 man.)
Apply for Rights
Click here for ePlay