The Santaland Diaries and Season's Greetings 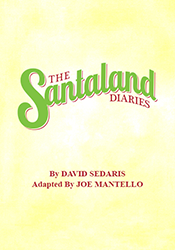 One Acts, Comic Monologues
1 man, 1 woman
Total Cast: 2, Flexible Set
ISBN-13: 978-0-8222-1631-5
Apply for Rights
FEE: $130 per performance; $50 each when performed individually.
THE STORIES: THE SANTALAND DIARIES is a brilliant evocation of what a slacker’s Christmas must feel like. Out of work, our slacker decides to become a Macy’s elf during the holiday crunch. At first the job is simply humiliating, but once the thousands of visitors start pouring through Santa’s workshop, he becomes battle-weary and bitter. Finding consolation in the fact that some of the other elves were television extras on One Life to Live, he grins and bears it, occasionally taking out his frustrations on the children and parents alike. The piece ends with yet another Santa being ushered into the workshop, but this one is different from the lecherous or drunken ones with whom he has had to work. This Santa actually seems to care about and love the children who come to see him, startling our hero into an uncharacteristic moment of goodwill, just before his employment runs out. (1 man.) SEASON’S GREETINGS. Another funny, touching—and twisted—monologue about the season. (1 woman.)
“A delightfully thorny account of working as a Yuletide elf at Macy’s. Priceless observations, both outrageous and subtle. Destined to hold a place in the annals of American humor writing.” —NY Times. “A sardonic, merrily subversive tale—just the antidote to bright-eyed joy before too many shopping days have passed. Worth more than a photo album full of Santas!” —NY Newsday. “A satirical brazenness that holds up next to Twain and Nathanael West.” —The New Yorker. “THE SANTALAND DIARIES is quite possibly the thirty-one funniest pages of text published in the past quarter century…David Sedaris slays me.” —Seattle Weekly. “A caustic mix of J.D. Salinger and John Waters.” —Publishers Weekly. “A subversively cynical, misanthropic wit!” —Time Out NY.
Apply for Rights